“Coercion is no longer taboo.”

Has there ever been a time in history where those who have been coercing have been on the right side of history?

“The Ministries of Finance and Agriculture have advanced plans to buy out hundreds of farmers and, if necessary, expropriate them, in order to quickly reduce nitrogen emissions in the Netherlands. This Is apparent from documents that have been viewed by NRC. The cost of this operation could amount to 17 billion euros. The plans point to a rigorously different approach, in which coercion is no longer taboo.”

I’d actually be shocked if we don’t magically experience an “outbreak of mad cow disease” or some such thing after which we’ll find men with stern faces and women with deep scowls telling us how dangerous the consumption of meat is — because — well, the disease, of course.

We’ll see the usual “experts” trotted out (on the payroll of course), publishing gushing propaganda about the benefits of synthetic lab grown meat as well as the horrors of eating food from God’s green earth. That the synthetic lab grown meat is simply processed food, arguably the leading cause of cancer, will be called out by professionals in the industry only to be ridiculed and censored for “misinformation.”

You see, you can’t patent nature, and if you can’t patent it, you can’t do what Monsanto has done to the grain industry, which is to create a never-ending revenue stream and complete reliance on their seeds and all manner of chemicals required to keep said seeds from failing. It is an incredibly profitable business operation.

The desire to do the same with the meat market is insanely strong. In the meantime, we’re headed for serious food shortages. I’m not joking. Here is what happened when the Bolsheviks under Stalin tried putting the production of food in the hands of the state. It is known as the “Holodomor genocide,” otherwise known as the terror-famine. 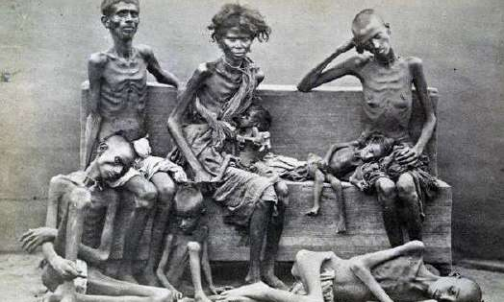 Like the impending disaster we’re walking into—this, too, was man made. It is worth noting the components or tools used in this genocide.

You may recognise them:

● Confiscation of citizens assets (you will own nothing and be happy)

● Assets placed in the hands of bureaucrats

It was a peacetime catastrophe.

Today is similar. The world is not at war. At least not yet, though tensions are rising, of course, and we are now set up for large scale food shortages.

Nobody knows for sure how many died in the Holodomor genocide. Estimates range from 4 to 12 million.

Don’t get me wrong… we’re not there but the facts are hard to ignore, and the elimination of private property ownership specifically with respect to food production is indeed similar.

We are moving into an economy that is controlled and one whereby private property ownership is being repudiated and replaced with state ownership.

We’ve more than enough evidence to know that this ends with skinny people, flies, and a diet of cabbage. And I hate cabbage… and you should, too. Horrible stuff!

Editor’s Note: We’re living in perhaps the most volatile times in several generations. With a potentially huge economic crisis looming on the horizon.

In their efforts to stimulate the economy, the government has printed and spent record amounts of money. This is driving the prices of everything – including stocks – to record highs. While the market is soaring today, we expect a collapse coming soon.

So, in a time where nearly every asset is overpriced, where do you find safe opportunities to reap potentially gigantic gains? This is the type of environment in which legendary crisis investor Doug Casey thrives.

He’s just released a new video where he shares his thoughts on today’s situation. And reveals his plans for how to set yourself up for big gains as the economic chaos grows.

This site uses Akismet to reduce spam. Learn how your comment data is processed.