Justin Trudeau just called an election. I want to tell you what we’re going to do at Rebel News. I think we can make a difference.

I think there are two problems in this election:

The mainstream media is completely compromised. I’m not sure if you heard, but just days ago, Trudeau gave an emergency payoff of $61 million to the media — and incredibly, the payments are secret. They’re keeping the names of the journalists a secret until after the election!

The second problem is that the Conservative Party isn’t very conservative. Whether it’s the carbon tax or the lockdowns, Erin O’Toole is too often indistinguishable from the Liberals.

So what can we do here at Rebel News? I’ve made a video outlining the three things we’re doing, starting today. Click here to watch it: 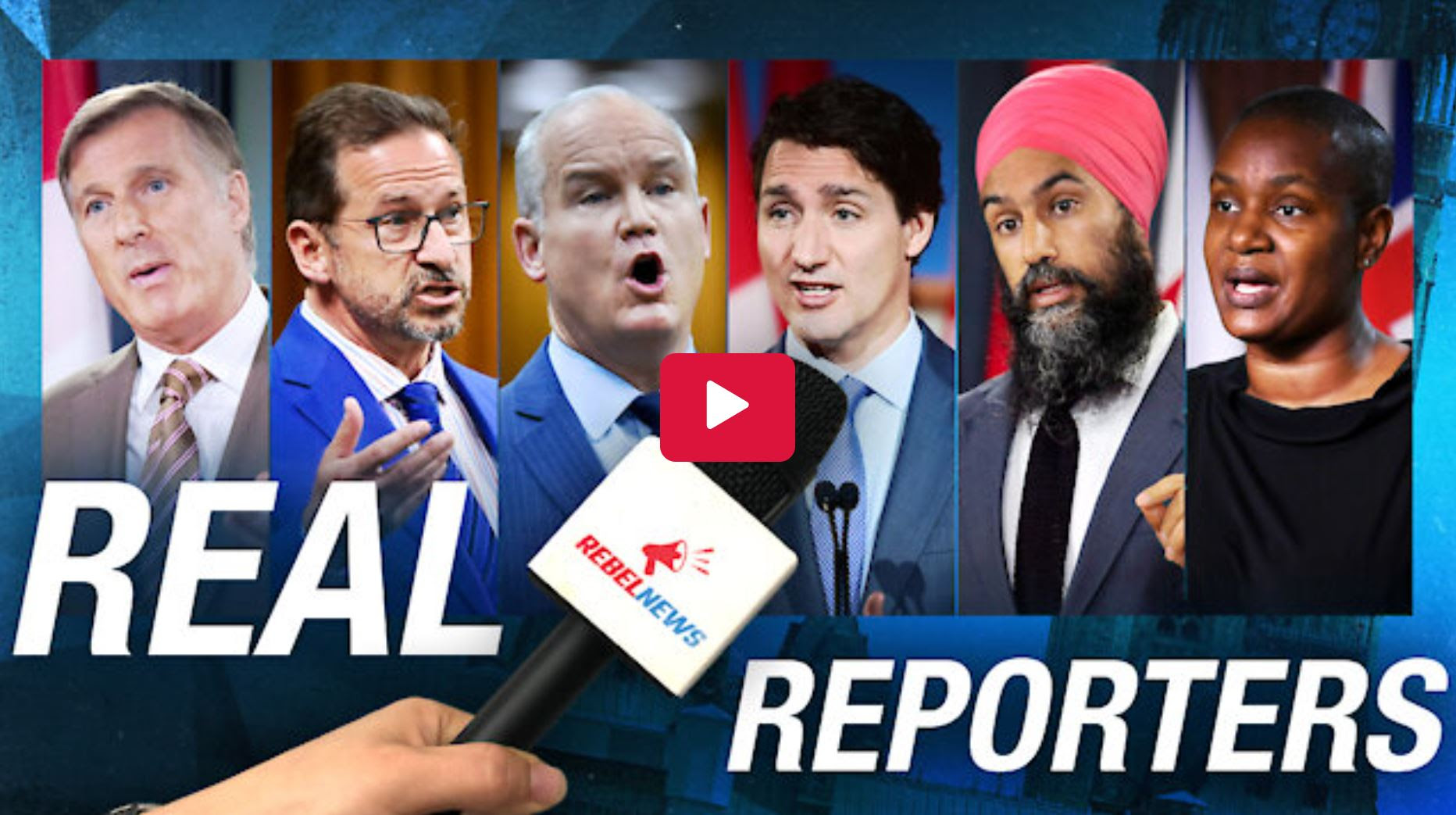 Our plan is simple. It’s three things. And I hope that if you think this plan will make a difference, that you’ll chip in to help us pay for it. Because unlike the mainstream media, we didn’t get a $61 million election bribe. We rely 100% on viewers like you.

Here are the three things:

1. Deploy the largest group of Rebel journalists ever assembled.

We now have the largest team of reporters we’ve ever had, based in Vancouver, Calgary, Edmonton, Toronto, Hamilton and Montreal.

We have to get our people on planes to criss-cross the country, to meet politicians where they are. We won’t be allowed on their official campaign jets — only the CBC and Globe and Mail and Toronto Star get to do that, because Trudeau trusts them to be obedient. So we’ll probably spend $50,000 on flights alone, plus hotels and taxis as needed. Please click here to help with our travel bills, if you can.

2. Make our premium shows (which are normally behind the paywall) free for everyone during the election.

We normally charge $8/month for that, but it’s just so important that all of our monologues and interviews be made available to the public during this key time.

So we’re giving up tens of thousands of dollars in subscription revenue, because we think it’s just that important for the news to get out. So if you can help us pay for that, please do, by clicking here.

3. Have our free speech legal team ready to fight against censorship.

We know that Trudeau has big plans to censor his critics, and he has repeatedly singled us out. In fact, his Election Commissioner has already fined me $3,000 for publishing my book “The Libranos”. And last time, we had to run to court to get an emergency injunction to force Trudeau’s debates commission to let us cover that public event. It’s going to be worse this time, but we’re better prepared — we have daily meetings with our free speech lawyers.

So that’s our plan: have our reporters fan out across Canada; make our premium shows available for free to everyone; and have our free speech lawyers on standby to fight.

If you think that’s a good plan, please help us out. Even $10 helps. Unlike most of the media, we don’t take a dime from Trudeau.

I have one more thing to tell you because I think it’s really important.

We’re not just going to ask tough questions of Justin Trudeau and his Liberals.

We’re going to ask tough questions of all politicians — including Erin O’Toole. Because we’re alarmed that he has given up on true Conservative ideas. He supports the carbon tax and open borders immigration. And just last week, he fired his Yukon candidate for criticizing Trudeau’s plans for a mandatory vaccine passport. O’Toole also hasn’t had a word to say against Trudeau’s planned censorship bill, which would be the worst in the free world.

So I want you to know, we will not play favourites in this election — we will press candidates from all parties about freedom. Because we do not work for any party. We work only for our viewers.

You’re the ones who pay for our journalism, and we owe you our honesty. We’re going to grill Trudeau’s team about vaccine passports and endless lockdowns. But we’ll grill O’Toole’s team too.

And we’ll talk to the smaller parties too. Including Maxime Bernie’s PPC. And Jay Hill’s Maverick Party. And Derek Sloan. Because although they are small parties, they talk about freedom.

God knows the media loves the far-left-wing Green Party and the NDP, both of whom are truly fringe parties!

We want to talk about the issues the other guys won’t — that’s our motto, telling the other side of the story.

The “reporters” who just took a secret $61 million bribe on the eve of the election?

That’s my plan. It’s not going to defeat Trudeau. But it’s going to help promote the idea of freedom. It’s going to make sure the right questions are asked.

If you can help us, please click here, or go to RealReporters.ca.

This is the worst of times. But I believe that our reporters and our freedom lawyers can make this election better, and promote ideas that no-one else in the mainstream media or even the main parties want to talk about. If that’s important to you, please help.

P.S. I know that the political parties are asking you for donations right now. But I’d like you to consider donating to us instead. I truly think that $100 in our hands will go further, and make more of a difference, than sending it to politicians who already have tens of millions of dollars in campaign funds. If you agree, please click here.

P.P.S. We have our largest team of reporters ever, and we’re ready to do the hard work. Give us the tools, and we’ll do the job! Please click here to support us. (Thanks.)

This site uses Akismet to reduce spam. Learn how your comment data is processed.